When I started to really get head-over-heels for film photography, one "look" that caught my eye constantly was that of large format. We've all seen it before, beautifully straight lines in architecture, hyper-realistic tonality in portraits, other-worldly shifting of perspective, all signature looks of large format. And chances are, if you're reading this blog post right now, you've already been bit by the film bug, and in a bought of excessive G.A.S. (Gear Acquisition Syndrome), have found your way here. Well good news, you've come to the right place! I answer three emails per week from folks wanting to get into large format photography, so the information found here is the meat and potatoes from my 20 months at The Film Photography Podcast answering listener letters. Now let's get started and hopefully have you on your way to your first large format experience.

​Just to keep our bases covered, let's begin with "What is large format?" As you might recall, 35mm is a roll film size that is 24mm tall with frames that are typically 36mm across, but can shrink or lengthen depending on the specialty camera. Moving to medium format, this is another roll film format that is 60mm/6cm tall and can be: 4.5, 6, 7, 8, 9, 12, 16, 17, or even 24cm across. But once the film leaves the roll (there are exceptions to this rule) and whose smallest dimension is 4", you've entered the world of large format. Typical sizes for these sheet films include: 4x5", 5x7", and 8x10" with many specialty film sizes in between. Once the sheet has gone beyond 8x10", you're now dealing with Ultra Large Format! For simplicity's sake, let's limit the scope of this article to the typical large format sizes listed (4x5" - 8x10").

​Soon after discovering the format, the next question typically asked is, "What kind of camera should I get?" Though there is no right or wrong answer here, here are the three most common types of large format cameras, aka view cameras: 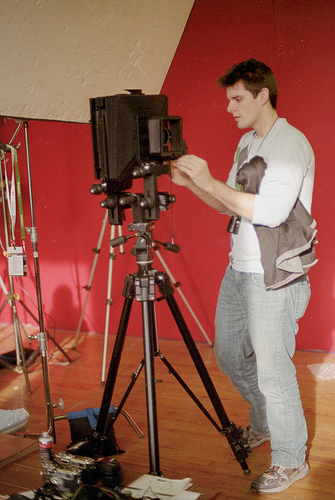 Press Cameras - These large format cameras are compact, portable, hand-holdable view cameras that are build for durability and ease of use. Oftentimes, these view cameras lack movements of the both the front standard (the lens plane) and rear standard (the film plane) that give the creative control that large format is known for. Notable press cameras include the Graflex Speed Graphic, Linhof Technika, and Busch Pressman. Used camera price range of $100 - $500 in good working order; Graflex and Burke & James make up the low end of the price scale while Linhof and Toyo are often newer, better functioning press models.

Pros - Cheap entry into large format, used kits often come with good lenses, smaller film size means cheaper film, and cheaper accessories. ​
Cons - Some older press cameras have bad compatibility with modern film holders, ​may have damaged focal plane shutters, and lack aforementioned camera movements.
Mat's Opinion - If you're looking to shoot things "press style" with a coupled rangefinder, by all means go for it. If you're looking for more cameras movements or playing around with big brass lenses, there are much better, sometimes cheaper, options.​

Monorail Cameras - The "Big Bertha" of the trio of view cameras, monorails have a reputation of being big, bulky, and otherwise hard to use outside of a studio. In exchange for all that heft, monorail cameras shine in their ability to have near endless movements in both front and rear standards. Many modern ones come with precisely geared movements, focusing scales, bubble levels, bright ground glass, and other crazy features like metering backs. Notable monorails include: Burke and James, Cambo, Horseman, Plaubel, and Sinar, to name a few. Used cameras range from $50 (old, heavy student cam) - $1500 (high end modern).

Pros - ​Camera movements only limited by your available bellows and lens, starter kits can be found cheaply from closing college darkrooms, and cameras are of rock solid build quality.
Cons - These cameras are not lightweight, and not recommended for long treks from the car. Sometimes the higher end "system-cameras" have extension rails and other accessories that are hard to find new/used.​
Mat's Opinion - At the low end of the pricing scale, monorails are a more cost-effective entry into large format than press cameras or field cameras, and they offer the most room to learn and grow with nearly unlimited movements. Also, you get a free workout hauling one around!

Field Cameras - The lighter-weight, portable solution to shooting large format in the field while maintaining creative control, field cameras are commonly looked upon as the holy grail of view cameras. ​These cameras typically have fewer movements than monorail cameras, but weigh considerably less, with most 4x5's coming in around 6 lbs. and 8x10's coming in around 12 lbs. Older field cameras are made of wood and brass, while newer models may be made of ABS, carbon fiber, or magnesium. Since field cameras are still in high demand in the niche large format market, your choices of camera manufacturer are greater, but so are the prices. Notable cameras include: Canham, Century, Chamonix, Deardorff, Ebony, Empire State, Kodak, Phillips, Richard Ritter, Rochester, Tachihara/Wista, and Walker. New field cameras range from $800 (Shen-Hao and Wista/Tachihara) - $4,000+ (Ebony, Canham, Richard Ritter). On the used market, prices aren't that far below, from $500 - $2500.

Pros - lightweight, most fold and pack easily for long hikes, modern field cameras are engineered to perform outstandingly, can be purchased new, and typically last a long time with heavy use.​
Cons - older cameras (50+ years) will need maintenance and wood cameras get a shaky with heavy age/use, they are more expensive compared to the other two options, and must be handled with considerably more care in the field than press and monorail cameras.
Mat's Opinion - great for beginners as well as end-users that want a durable camera that will last entire careers. Beginners may want to start with a cheaper model and trade up later.

Though there are some specialty cameras out there that fall somewhere in between the above categories, those three make up the vast majority of choices in the realm of large format cameras. Ultimately, the choice will be needs and preference based, and so long as you're comfortable shooting with the camera you have, nothing else matters. Please just remember folks, at the end of the day, the large format camera body is nothing but a box preventing any extra light from the lens to the film during exposure. There's plenty more to large format where that came from!

Once you've settled on at least the type of large format camera you'd like the next obvious question is, "What else do I need to get started?". I'm going to divide this answer into two parts, the bare-bones kit, and the every-toy-out-there kit. ​In no particular order, here's what else you'll need to get started shooting large format film.

Lens - get a "standard" lens to start, this means ~150mm on 4x5, 210mm on 5x7, or 360mm on 8x10. Nothing fancy, something something clean with a working shutter should do just fine.​ Used prices range $50 - $200 depending on make and condition. The ideal lens guide can be found here.
Tripod - something sturdy enough to hold your new , heavy camera, preferably with a pan-tilt head that can also accommodate the weight. ​$100 for an old wood or aluminum "clunker", $200 with a capable tripod head.
Film Holders - you need these in order to shoot your sheet film, so try and get modern plastic ones that have a lesser chance of leaking light. 4x5 holders range $10 - 50 while 5x7 and 8x10's go from $30 - $100. ​
Dark cloth - if you're on a budget, this can be a thick black t-shirt or hoodie, but new, dedicated darkcloths will range $30 - $75.
Focusing Loupe - Again, nothing over-the-top here, just something to magnify the image displayed on the ground glass, price range $15 - $50. ​
Cable release - Anything that will trip the shutter for your lens; ranging from your own hand, $0 to a new plastic coated release at $20. ​
Meter - If you're shooting out in predictable daylight, you can forgo this for good 'ole "Sunny 16", otherwise, look into a simple selenium cell, battery free model. $0 - $100.​
Gear Bag(s) - something to hold all of this gear, it's not just a camera now! Any sturdy, padded old case will do for the camera, t-shirt wraps for the lenses, and padded lunch bags for film holders. $25 - 150.

Lenses - add to the above kit a wide angle lens, this means 90mm on 4x5, 150mm on 5x7, and 240mm on 8x10. If you like a little more telephoto, try 210mm on 4x5, 300mm on 5x7, and 450mm on 8x10.  Modern lenses in these focal lengths won't be outrageously pricey, but the wider the maximum aperture, the higher the premium you'll be paying for them. Expect $500 - $2000 for both, add an extra $100 if you need a lens boards for them.
Tripod - replace the aforementioned clunker with a brand new carbon fiber model, for the ultimate in stability and less travel weight. $400 used - $1000 new with pan-tilt head.​
Film Holders - since money is no object, get as many, good/almost new plastic holders as you can afford. It really comes in handy to have extra, ~20 for 4x5, 12 for 5x7, and 10 for 8x10 should do the trick. Price range $150 - $500. ​
Dark cloth - A custom made, lightweight, weatherproof darkcloth with sleeves for your arms and that will also wrap around the ground glass for the ultimate viewing experience. $75 - $125.
Focusing Loupe - high quality (Schneider and the like), 6x or higher for 4x5, 4x for 8x10, magnification to check that your focus is insanely spot on​. $50 - $200.
Cable release - durable, long through, metal wound cable release cable of working in the hottest and coldest conditions that you are. Ebony and Geppy area good bet, starting from. $25 - $125. ​You may want more than one!
Meter - A high quality ambient and flash meter, capable of reading from a reflected dome and spot metering. If you're a nature-only shooter, a classic like the Asahi Pentax Digital Spotmeter is a must. $250 - $500. ​
Gear Bag(s) - Custom made bags/cases for large format gear can be a pain in the wallet, but a sigh of relief on the back when hiking in the field. Think F.64, Photobackpacker, and other big names like Tenba, ThinkTank, and LowePro for the main camera bag. $200 - $400. Protecting your lens investment is also a must, add in $25 - $75 more for padded lens wraps. ​
Other Toys - ​Bag bellows for wide and super-wide angle lenses, ground glass protective covers, compendium lens shades, B&W and color correction filter kits, univeral iris clamp, Petzval and other soft focus lenses, Packard shutters, wet plate holders, the list goes on and on.

Considering many people that email me about large format photography aren't even really sure if they like it yet, I often recommend to them the Bare-Bones kit. It's more than enough to get started shooting, and isn't over-the-top expensive should the photographer later on decide to sell/upgrade their kit. ​As demonstrated above, spending can get out of hand relatively quickly in this niche market, so saving a buck where and when one can is a must. Sure, it's possible to shoot large format with less, but expect this list to be part of the "large format needs".

​Now that the gear itself has been identified (and priced), next week we'll be answering the big question, "Where can I get some large format film?"

In the mean time, feel free to shoot me your questions via email, or right below in the comments. As always, happy shooting, and long live film!