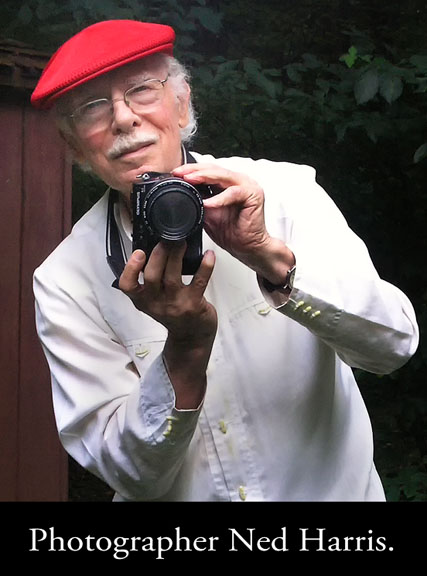 Mr Harris has a second life as a curator. His role as curator began when the Rockland Center for the Arts celebrated his book's publication with an exhibit, leading to Mr. Harris becoming chairman of the exhibition committee. During his years with Rockland, he curated many exhibits featuring themes of social and political interest. 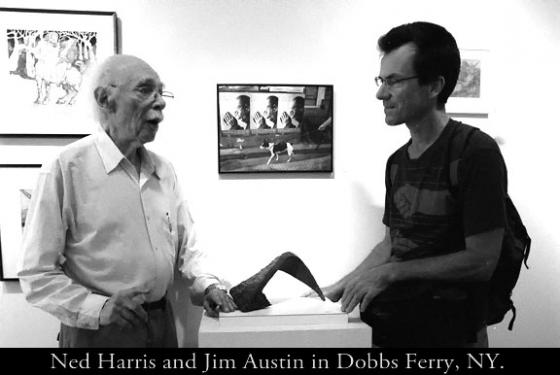 Jim Austin (JA):  Mr. Harris, where are you from, and how does where you live influence your photography?

Ned Harris (NH):  I was born in the Bronx, grew up in Manhattan and have always lived near the Hudson River.  The city (NYC) and its museums still remain the heart of my photography collection. I was a painter first and started taking the camera seriously in 1955.  I love the river, just like Mark Twain loved the Mississippi.  And I've always been a beach comber with the compulsive urge to pick up objects along the river, so over the years, I would photograph those things and then transform them to make them beautiful. 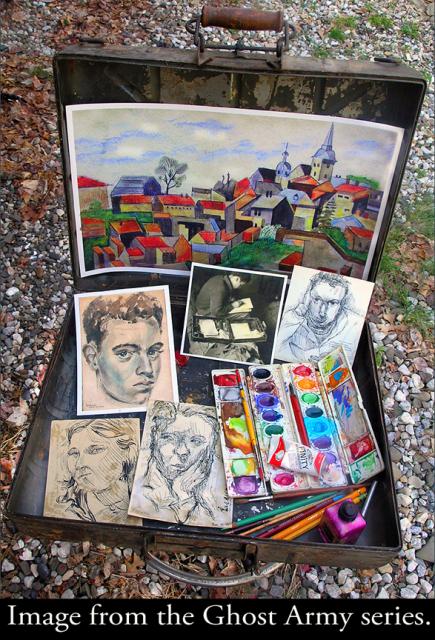 It was a time when you could go by train or bus for ten cents to the heart of New York with a new Kodak Baby Brown camera. This enjoyable moment was interrupted when I was inducted into the Army when I was eighteen. It was an experience that remains clear in my memory due to the uniqueness of my outfit, which was called the Ghost Army. Like many artists, I took a course in camouflage and deceive the enemy with phony rubber tanks and artillery. This story has emerged recently in a documentary film that features survivors of the outfit, like myself. 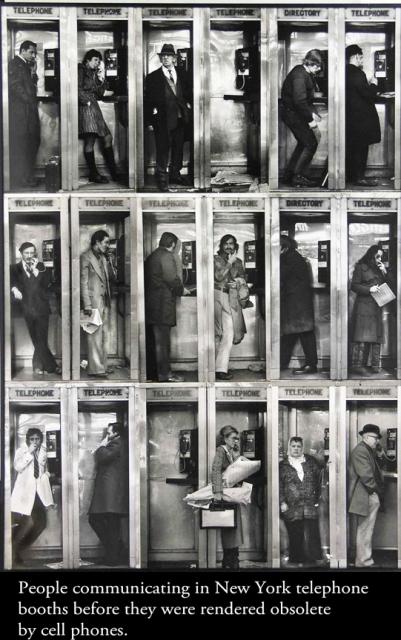 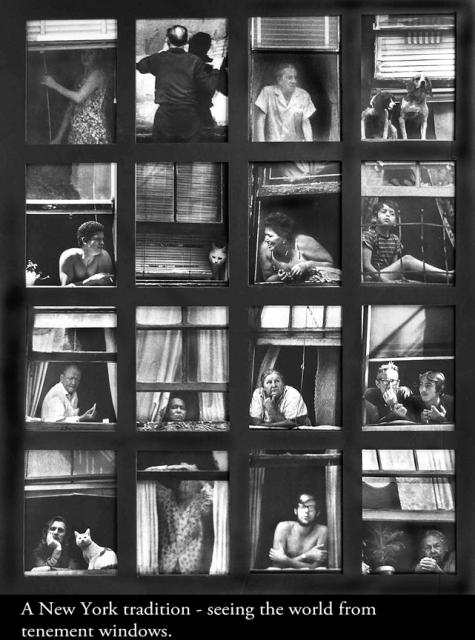 JA:  What do you mean by transforming an object?

NH:  I make an image of the found object and then take the photo into the studio, download it to my computer, and start transforming it in Photoshop.

JA:  So you worked with expressing your ideas both in film and with digital?

NH:  Yes, I got on board the digital train after working with film for many years.  I've enjoyed having the digital world at my fingertips; it has greatly affected my attitude in a positive way.  It comes at a wonderful moment.  My prior work has become new again through digital. 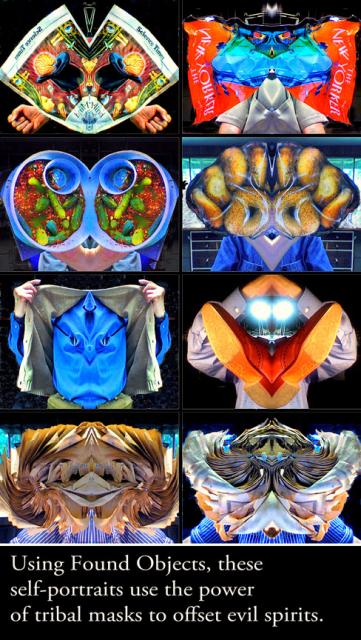 JA:  OK, I can see from your images that digital is transforming for you. What is your image making style and philosophy now?

NH: I work like an acrobat.  I balance the images of New York City that I made with my digital camera in combination with my earlier work.  I started with a Nikon 35 mm camera.  I was always on the run in the city and everyone was moving so fast.  In those days I was working in black and white, so for awhile, I abandoned color, but came back to it.  Lately, I've been creating photos on the streets of New York, near 42nd street and around where I used to work in my office doing cosmetic package design.  In my home gallery, I have a body of work from this part of NYC.  If I was a hunter, that area in the city would be my hunting ground ( laughing )!

JA:  As we talk, and from looking at your prints, I get the sense that humor plays a large role in your photos, Ned, is that right?

NH:  It is.  Let me share a story.  One day I was walking around, with camera in-hand, and passed a storefront in Manhattan.  I saw someone carrying a body - hoisting it on his shoulders and out onto the street.  He put the body down on the sidewalk and I saw it was Albert Einstein.  I looked at the store and saw that I was outside the wax museum.  I photographed all the tourists who were photographing Einstein lying on the sidewalk, and strangers kept saying to me, “Do you know you look like Albert Einstein?” 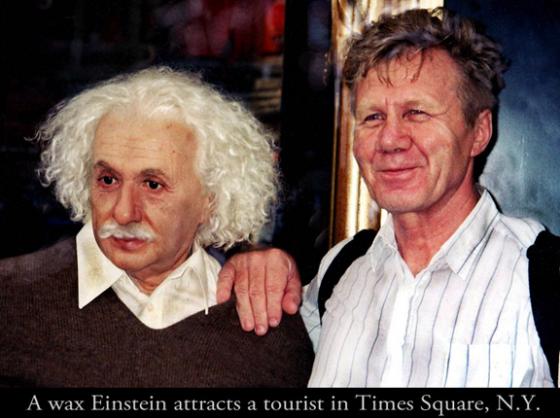 JA:  So Ned, you told me you are 87 years old.  What is the most important thing you've learned about photography, that you did not know when you are younger?

NH:  The camera is a wonderful friend that doesn't forget anything.  I don't remember, but my camera does!  And art is a wonderful connector!  All my friends are in the field of art. 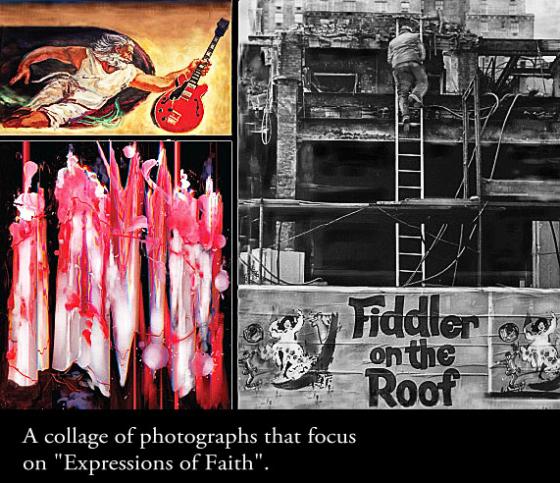 JA:  You mentioned your home gallery.  Can you tell me about your recent gallery shows?

NH:  Yes, I have 16 photographs in the GAGA Gallery in Garnerville near Haverstraw, New York, on the Hudson River.  These images include portraits and New York scenes.  I treated all the photographs like a stage set, layering people over the scenes using Photoshop layers.  The GAGA Gallery was previously a 19th century textile mill.  The gallery was flooded during Hurricane Irene on August 20, 2011, and a lot of the art was damaged.  I thought all my work was lost.  But the gallery was repaired in 2012, and they called me to let me know they found all my work, undamaged.  The show is called “ReConstruct”.

I’ve also completed work for a group show at the Jewish Community Center in Rockland.  My work is called, "Expressions of Faith."  It explores signs of Jewish belief on the streets of New York and Jerusalem.  The completed photographs were created using my Photoshop experiments with the computer.

I also have other works of photo art at the Blue Door Gallery.

JA:  What are you working on now?

NH:  I joined the Upstream Gallery, a cooperative gallery in Dobbs Ferry, Westchester, New York. I'm also working on a series called “Double Vision”, bringing back my older paintings and putting them side-by-side with my photographs.  I'm connecting the past with the present.  This connection is magic, because the older I get the more I know.  There are things that the camera remembers—where I was and moments with my wife and family.  I'm reliving it as if it were yesterday.

JA: Ned, can  you tell me about upcoming shows?

JA: What do you recall about your grandfather's photography?

SS: My early memory of his work was seeing his black and white pictures of found objects throughout New York City in his book, Form and Texture.  He photographed public spaces and unique, quirky things.  That's a strong theme in his work.  I mean, he's definitely had a diverse career.

JA: What are your grandfather's strengths as an artist?

SS: His “eye” and his sense of humor stands out - finding the humor and the quirky in every day experiences.  He never goes anywhere without his camera.  Even in the most mundane and ordinary circumstances, something always catches his eye.  He's also incredibly outgoing.  At his shows he loves to talk about his work and share his ideas with other people.  Also, he makes such a range of creative work.  I love going to his studio.  It's not just printed photographic art.  He always finds a way to make 3D models, hang them and display them in a dimensional, unique way.

JA: How has your grandfather and his art influenced you?

SS: He has been my biggest mentor.  My parents support my art, but as far as art goes, I've been especially connected to my grandfather.  Even in high school, he was the one who encouraged and pushed me when I was not sure of my direction.  He would tell me things would work out.  As I got older, I started to see the things about art and composition that he would point out to me.

I recently took up the art of photography. A portion of my craft is me observing him, while another portion is us building on each others ideas, because we share a similar personality.

JA: Thanks, Shoshanna, I'm grateful to you and Ned for making time to share your passion for photography and the arts ! 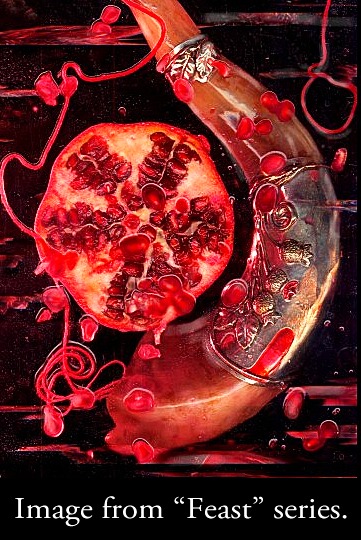 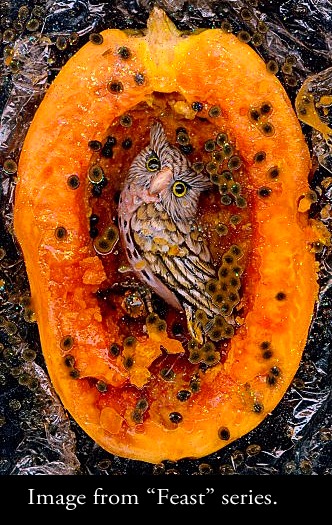 See his documentary at www.ghostarmy.org

His book, by publisher Van Nostrand Reinhold, is titled "Form and Texture" is on Amazon.com.

Current exhibit of “ReConstruct” at the GAGA Gallery at the Garnerville Arts and Industrial Center.  (www.gagaartscenter.org)

About the Author: Jim Austin is shooting with a Bronica SQ and a Contarex Bullseye. He leads adventure photography workshops for film and digital visionaries, has 4 eBooks available through his website, teaches photography through Flickr, and writes for Apogee Magazine, HDR One, FPP and other publications. Download his new photography book, Americans on Parade, at www.jimages.com