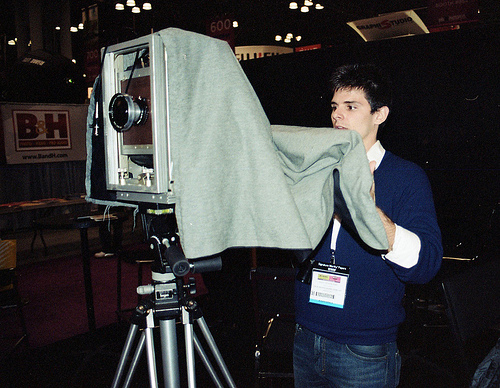 Anybody that's listened to the Film Photography Podcast for more than five minutes knows that founder and host, Michael Raso, has "a thing" for Polaroid instant film. What some folks might not know, however, is that as a co-host, being around Mike one too many podcasts has given me "the bug" as well. So much, however, that I didn't stop at 600 series cameras and pack film, I needed bigger! How big? Big enough to shoot Polaroid on my absolute favorite camera, the Eastman Commercial 8x10!

Released in 1973, following the 15 years of success with single sheet 4x5 Polaroid film, Polaroid gave to the world a high resolution, single sheet proofing solution for 8x10 shooters. With increased demand during the 8x10 renaissance of the 1980's, Polaroid began offering the film in wider varieties, including 8x10 instant transparencies (Type 891) and instant orthochromatic, transluscent prints (Type TPX). The two most commonly found varieties of 8x10 Polaroid on the used market today are Type 809, a medium contrast, ASA 80 color film, and Type 804, a 100 ASA B&W film.

In addition to their larger image size, Polaroid 800 series films were also packaged and processed like no others before them. A box of Polaroid 8x10 film was shipped with two separate containers, one with 15 sheets of sleeved negative film, and another package with 15 sheets of the reagent pods + positive paper. To make an image, one would have to:

For more in-depth directions (with pictures!), be sure to check out the Polaroid 8x10 User's Manual (PDF).

As with any other large format process, it's a fundamentally easy task that only ever becomes easy with practice and care. So why go through the process? To get a nice, big, smoothly-toned 8x10 print without having to load film in the dark, wait to process it, and then finally print it. Everything in the world of large format is a slow, contemplative process, so 5 min. is lightning fast to us 8x10 guys!

So now that everyone's up to speed on this big, beautiful Polaroid series of film, I've got some cold, sobering news for everyone. This film is as sought-after as any other discontinued Polaroid film. But take a product that was ~$100/box, add a whole slew of demand with a finite supply, and you get inflated prices very, very quickly. Not even the legendary Time Zero films come close to what that Polaroid 8x10 costs per shot. One distraught studio photographer was so upside himself without 8x10 Polaroid, he spent half a million dollars making his own 8x10 Digital Capture Back. For the rest of us non-millionaire studio shooters, we can save our pennies and buy the last of a fading fleet of Polaroid 809 from The Impossible Project.

Being the Super-Positive kind of guy I am, I can't just leave this article on a "doom and gloom" note. Let's watch the making of the latest in my Polaroid 8x10 series. You've heard all about her on the Film Photography Podcast, but now here she is for the first time on 8x10 film, the one, the only, Leslie Hunsberger of Imagine That!

I hope everyone has enjoyed this little walkthrough on Polaroid's 2nd biggest format*. If you have any questions regarding 8x10 Polaroid or anything large format related, feel free to email me: mat.marrash@filmphotographyproject.com

*the biggest recorded Polaroid camera wasn't 20x24, but actually 40x80. It was limited to one camera and a very short supply of film stock, therefore it's not counted in the BIG formats.