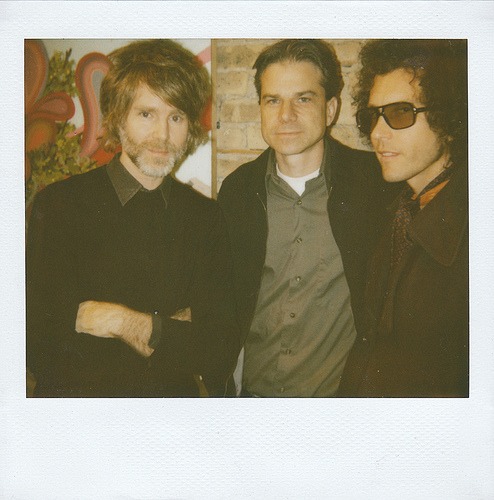 How could I go so long without picking up my Polaroid Spectra camera? There are countless factors that added up to my leaving her on the shelf for so long. One, I had always used a Spectra in high school, so of course I felt I had to move on to something more obscure and unusual…more fitting to my age. Something like a Holga or some other hip camera with a colored flash or a wide-angle lens. Another reason is enormous frustration cultivated by the eBay Polaroid Spectra film online bidding wars. “Forget it then!” I’d say after losing, last minute, to someone willing to pay more hundreds than I, “I’ll use my Diana!”

But the main reason I avoided my Spectra for so long: Simple intimidation.

In my younger days I’d never been worried about what would amount during a fun-filled instant film play day. Never. Anything that would develop would be entertaining and exciting. I’d point and shoot without a worry in the world. I was a teenager, a moody, arty one. These days, with all the fantastic Polaroid photographers out there - could I really compete anymore? Could I even take an interesting picture without the help of light leaks or F-stop control or…a dark room?

When Film Photography Project’s Michael Raso asked me (so long ago, now) to shoot the Sansone exhibit with the Spectra, I saw it as an opportunity to get back in the saddle and reacquainted with my old favorite. A Spectra isn’t like a Polaroid 600 camera, or any other instant camera. Who can resist its flaxen hues, it’s expansive frame. It had been so long that I really had no idea what to expect, so the fear of total humiliation provided a challenge of sorts.

When I arrived at the Pat Sansone “100 Polaroids” book signing, there was hardly anyone there. A few random bodies, meandering around the beautiful loft space. 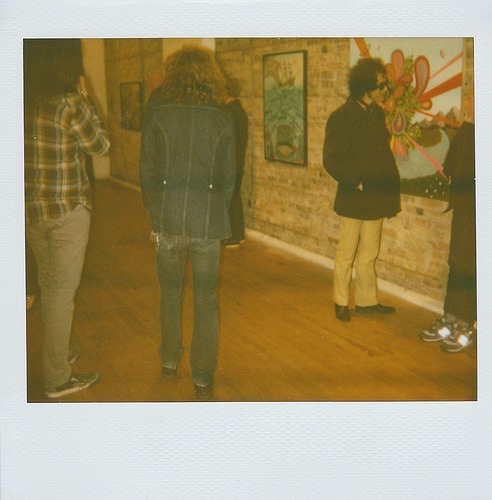 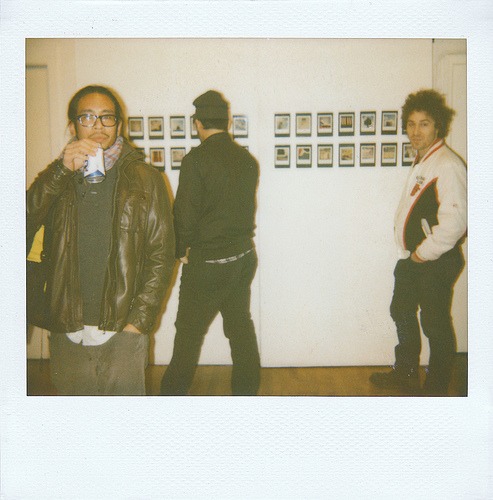 I didn’t really know what to do. I started shooting…and in view of Pat Sansone’s uber professional grade prints…I began to panic.
Good thing I brought my model friend, Tiana to help me fill the gaps of anxiety. 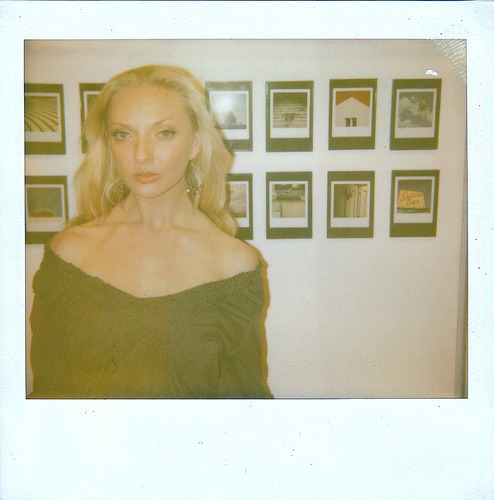 We were so early; there wasn’t much to shoot. Pat was busy chatting and, as it turns out, I’m the worst paparazzo there is.
What I wanted to do was get up in people’s face.

That’s me, though. Because I was too shy to shove my camera in someone else’s face. 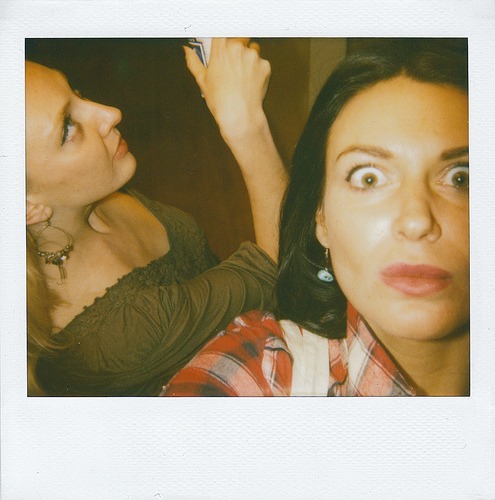 Eventually, the crowd began to grow and, thanks to the help of some Pabst blue ribbon, I began to get a touch braver. 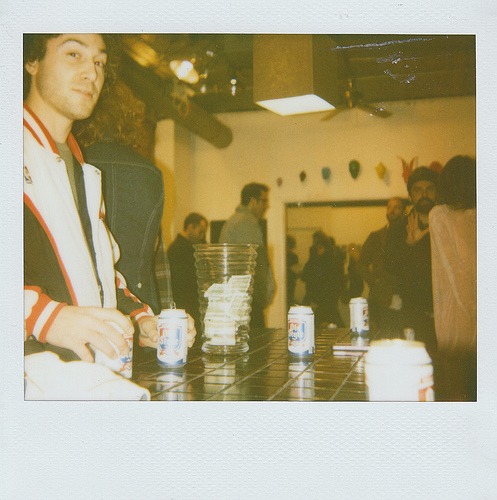 That guy on the right was so great. Completely photo worthy. 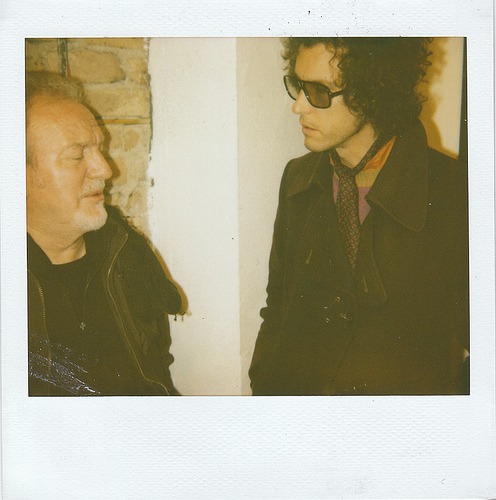 You’d be surprised how willing people are to be in photos if you just ask them. 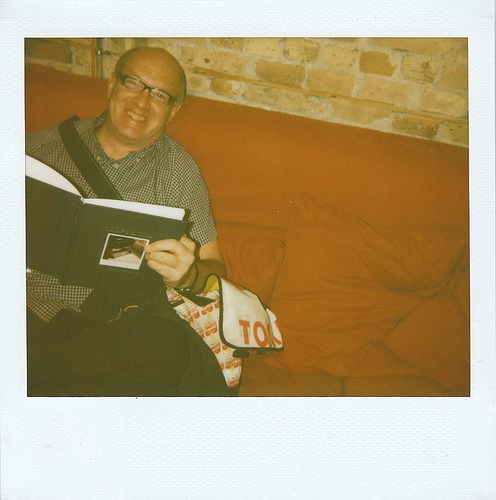 As the evening wore on, things loosened up a bit.
I started caring less about whether my pictures would measure up to the gallery quality around me.
After all, isn’t that what I did as a teenager? Just shoot and have fun? I believe that’s what film photography is all about! 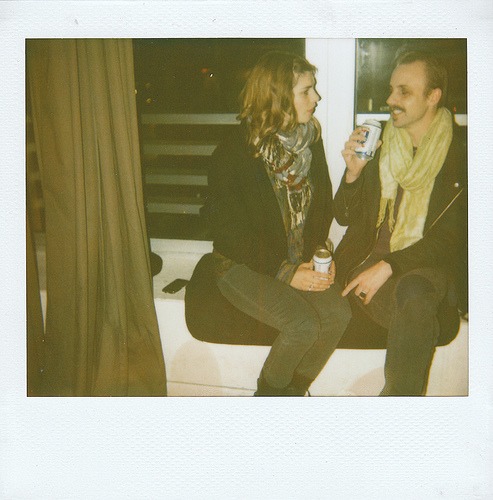 Looking back on the pictures now, I have a fondness for them that I didn’t have way back in November.
I’m less critical and more appreciative of the color palette the Spectra offers. 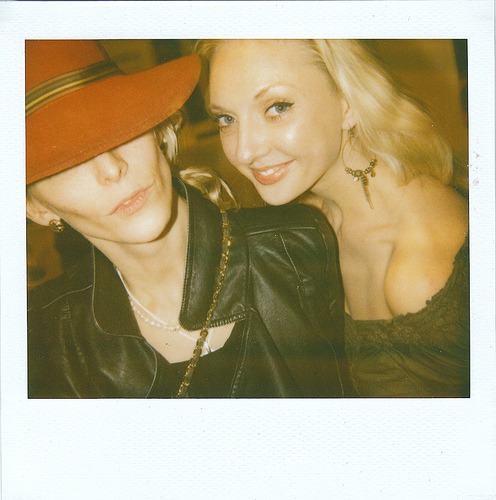 A population of feet and legs are one of my favorite subjects. 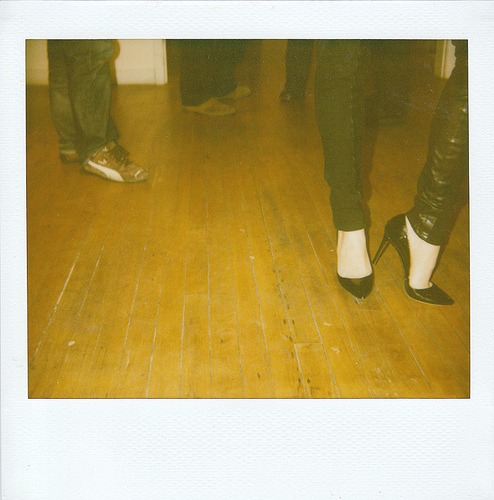 I wonder what she’s saying… 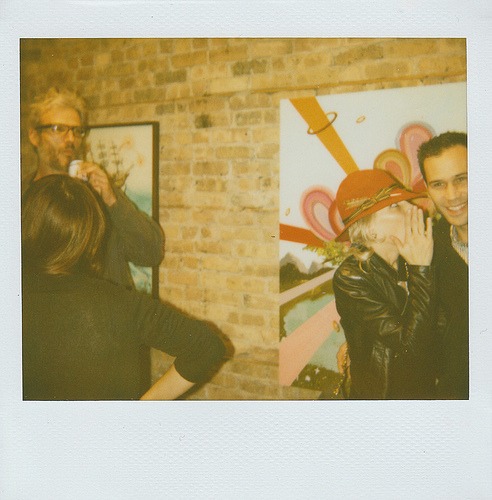 Pat and a friend. 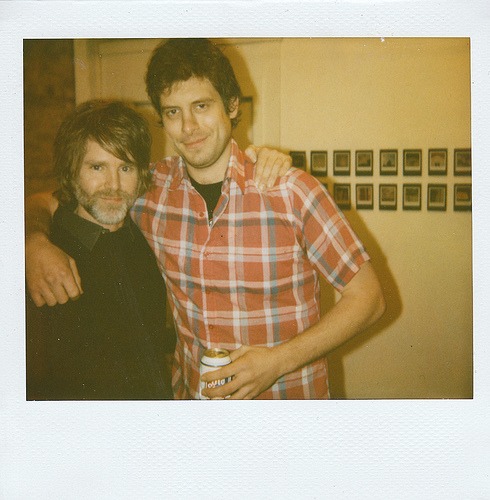 The rest of the photos, for me, proved to me less than interesting. So, I leaned on my high school self to get creative with the prints. I got the scissors and a penny and went to town like they were a bunch of scratch tickets. I pulled off the layers, I rearranged and I…am happy with the results. They make me nostalgic for the days without Adobe Photoshop software. 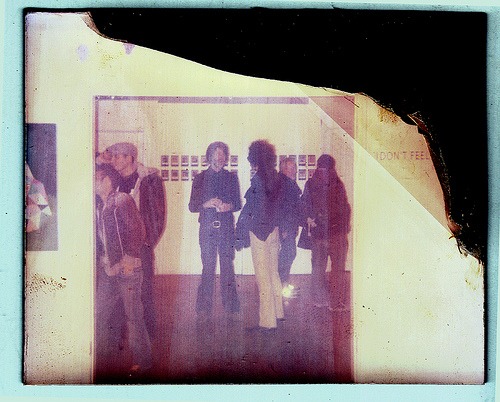 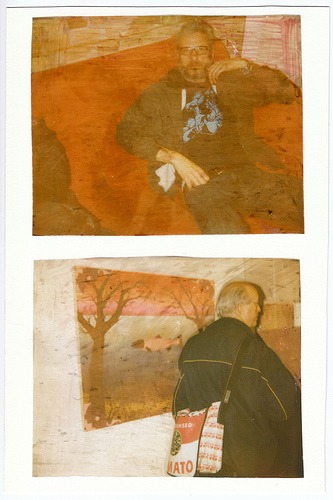 And lastly (above), a photo that looks like it was taken year and years ago. One of the reasons I so love Polaroid photography. It will be a long while before I hesitate to pick up the Spectra again. I might not be a master photographer…but I’ll always have fun!!!

Musician, Photographer Pat Sansone is a multi-instrumentalist in the rock bands The Autumn Defense and Wilco. His tremendously tuned ear has led him to become a studio musician and producer. His own project The Autumn Defense was formed in New Orleans in 1999 with friend John Stirratt of Wilco, and the band is responsible for three full length albums. Pat and John’s new album “Once Around” was released on November 2, 2010.