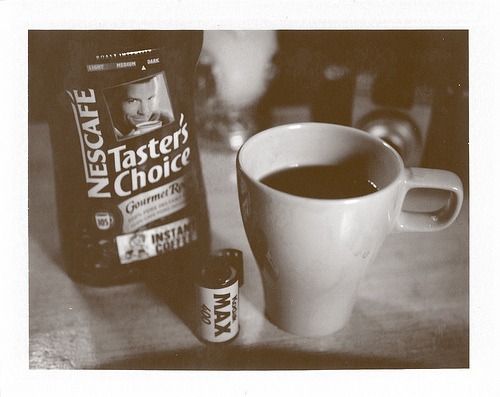 I'd read on Flickr about something called Caffenol. Fancy name, sure, but it's basically just instant coffee, washing soda and water. Some people add Vitamin C. And this Caffenol stuff can be used to develop black and white film or colour film as black and white. My experimental side was awakened and my thrifty side was even more excited so I decided to take the plunge! Here's what I did.

I had a roll of expired Solaris brand C41 colour film - only 12 shots so I figured I wouldn't be losing much in the event of my Caffenol experiment not working. Using my changing bag I loaded the film into a developing tank and then prepared the required ingredients. I used:

Each was mixed in 125ml of water (125ml plus coffee and 125ml plus soda) and then the two were put in a jug with an extra 100ml of water. I put the jug in a warm water bath until it reached 20 degrees C and then poured the mixture into the tank.

The tank was agitated (turned upside down and the right way up again) for a minute and then agitated 4 times every 3 minutes. I did this for 25 minutes.

I then poured the non-toxic mixture down the sink and rinsed it with water, 5 times. This stops the developing process. Fixer was then added (this is the only “real” chemical you'll need) and agitated 4 times once a minute for 3 minutes. The fixer was then poured back into the bottle for reusing.

The film was then washed by pouring water into the tank, agitating 5 times, emptying then refilling agitating 10 times, emptying and finally agitating 20 times. I then put a little wetting agent into the water, removed the film and hung it to dry for around four hours. 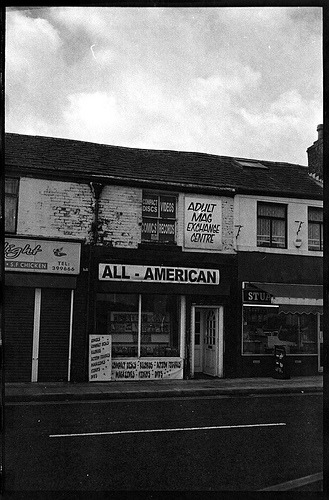 I have to say, I was pretty pleased with the results and one of the shots (above) is a personal favorite of mine—a sleazy adult magazine store (and no, I haven't been in!). Considering the film was expired, was meant to be colour and was developed as black and white in a bizarre mixture of coffee and washing soda, I think the results were pretty good. 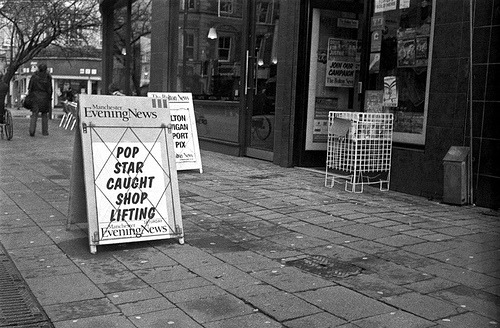 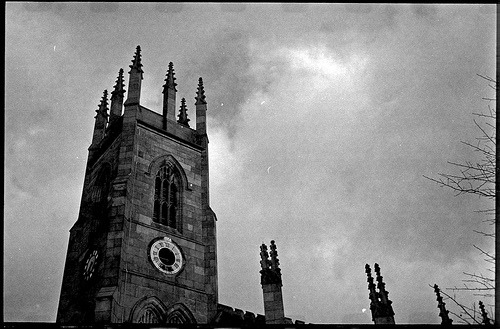 It's not the sharpest of processes but for someone like me who likes grungy photography, it's a process I'll definitely be investigating further. It looks like adding the Vitamin C can speed up the developing process a little when using proper black and white film but I can't say for certain - it's all about experimentation!

So get yourself some cheap instant coffee, some cheap washing soda and give it a go!


These sites were inspiring and very helpful to me: