Stefan Elnabli of the NYU Moving Image Archiving and Preservation Program interviewed me this month about my ongoing film preservation work. I'm happy to share it here.

Motion picture producer, filmmaker and photographer Michael Raso has been working professionally in the visual arts for over 20 years. In 1994 he launched his filmmaking studio and distribution companies, Seduction Cinema, Shock-O-Rama and Camp Motion Pictures. In 1998, Michael began his retro line, finding, restoring and releasing lost and forgotten horror and exploitation films to home video - a passion that continues to this day.

Q. Your companies Pop Cinema and Alternative Cinema distributes new films as well as films of the past. Your "Retro 80s Horror Collection" offers some pretty wild titles in independent exploitation horror. What is the process like when you are producing a DVD for distribution in a collection like that, from the acquisition phase to final release?

I’ll use the movie “Video Violence” as an example: shot in 1987 and released as part of the “Retro 80s Horror Collection” series from my home DVD company, CAMP MOTION PICTURES, it embodies all of the characteristics of this era and style of “film”: shot on video, micro-budget, and originally distributed Direct-To-VHS.

When acquiring a vintage film for distribution, the first step is to do an inventory of materials. Writer/director Gary Cohen’s office is a short distance from my studio and he was kind enough to deliver the materials personally. In the oversized box were dozens of Sony U-Matics (a broadcast tape format that was introduced in 1971). The Sony U-Matic was solid, durable and was heavily used for shooting news on video through the 1990s. Unfortunately, the box did not contain any edited master tapes. According to Gary they were lost during the “VHS distribution” days. Luckily, there was a VHS copy of the film in the box.

Once the materials were inventoried, I decided that the VHS master was not high quality enough to be released on DVD and the movie would have to be reassembled from the original U-Matic camera tapes. The VHS master served as the template for editing the raw footage on the U-Matics and thus the film was lovingly “restored” from the original elements.

Q. What about the retro-sexploitation film releases that you put out, where original film elements could possibly be up to 50 years old?

The same process applies for motion picture films – first, inventory of materials. With film materials, proper storage is usually the key to preserving the original materials. Unfortunately, climate-controlled storage is expensive, and many films are badly damaged or lost due to improper storage or neglect. Some films were abandoned by their producers in film labs, only to be thrown into a garbage dumpster when that lab moved or went out of business. Kudos to Chris Nebe (producer, Joe Sarno’s “Butterflies,” “Bibi,” “Veil of Blood”) and Sam Sherman (producer, Independent-International Pictures) - both men were scrupulous regarding proper storage of their negatives as well as the prints to the films they own. 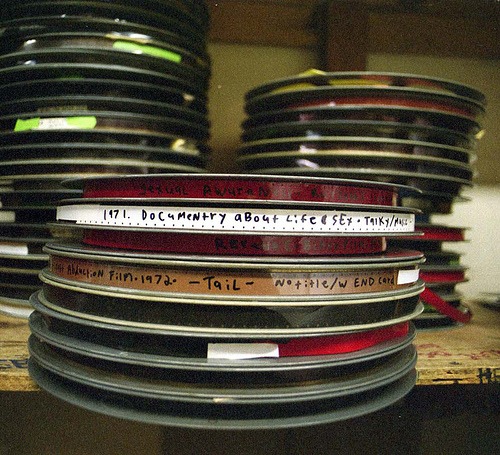 Q. When dealing with original film elements, do you perform inspection/repair and any other conservation actions to prep films for a video-transfer, and what kinds of tools does it take to perform this kind of film work?

With film elements, initial quality control is performed by hand: I inspect the print for any visible damage such as sprocket damage or rips. Then, I view the film on a telecine machine. The term telecine refers both to the film-to-tape transferring machine, as well as the process by which film is transferred to tape. A qualified film colorist sits in on this process with me. The colorist alters and enhances the image electronically, then the film is mastered to a hi-definition video format.

Q. During a film-to-video transfer, what kinds of restoration actions do you take when thinking about the final distribution product?

Most every time, a film negative or print that is 25 years or older has faded and lost some of its original color. First step before telecine is to clean the film. Film cleaner can remove grease, ink, adhesive, smoke stains, soot, fungus and other oils from the film negatives or prints. 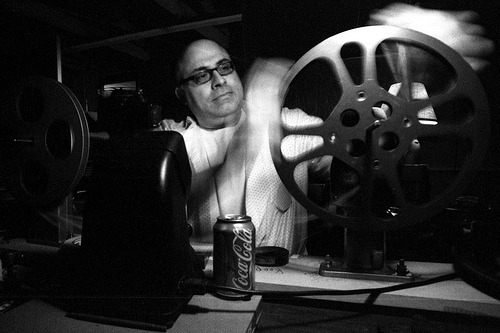 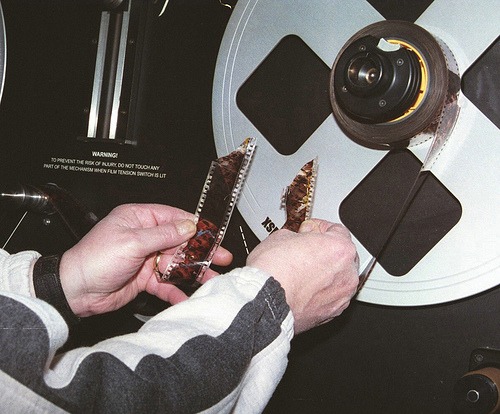 Electronic devices like the Da Vinci telecine machine make near miracles possible during telecine. The Da Vinci System is one of the manufacturers of high-end post-production color grading and film restoration systems. Many times, the original brilliant color can be restored.

Q. Do you work with any of the original filmmakers during this process?

Whenever possible, I work with the original film director. In the past I’ve been fortunate to have Joe Sarno (Swedish Wildcats, Inga), Carter Stevens (Punk Rock), Sam Sherman (Mean Mother, Dracula vs Frankenstein) and others to sit in during the telecine process.

Q. Have you found that there is a limit to the amount of restoration that someone can do on a film, where going so far might betray the original experience of seeing a print of a film during the time of its exhibition?

I do feel it is important to keep the final product authentic to the original viewing experience. And frankly, it’s an amazing and time consuming challenge just to get a film to its original state.

Q. Are there any films that you've released that you've also done film preservation work on, whether that's making an inter-negative, a new print, or any other preservation related actions? If so, what is that process like, from securing funds either through grants or your own investment to working with film vendors and finally securing some kind of archival storage for the finished preservation work?

Many, many times I have wished to take finished restored digital Hi-Definition masters to the next step, which would be the process of striking a new film print. Unfortunately, the cost involved was prohibitive when release on DVD was the end goal. Having said that, one of my dreams is to coordinate a program of important vintage sexploitation films for international film festival exposure, utilizing a combination of original film elements and new prints struck from my restorations – this would be a dream come true.

Q. Have you ever began working on a project that led to the discovery of a film thought to be lost, or the discovery of film elements that are in better condition or have more content than any of the other known film elements of a particular title? Can you comment about any of your experiences with these kinds of discoveries?

I’m thrilled to say, “yes”! I’m in the process of evaluating and releasing a vintage erotic film library stored on 9th Avenue in New York City. As part of this process, during the summer of 2008, I worked almost daily archiving and reviewing film elements from this library. One day while working, I was visited by film historian and colleague Michael Bowen. He was looking around the room and noticed the scribbling on the unassuming box on the shelf. “I don’t believe it, but I think that the box above your head reads All the Sins of Sodom,” he said. We pulled the big box down and opened it, and inside were the complete negative and sound elements for All the Sins of Sodom, a film previously thought to be lost (no film, no VHS, no screenings were ever documented since its original theatrical run). As I’ve worked closely with Joe Sarno for years (and own the rights to many of his films), this was a particularly amazing moment. 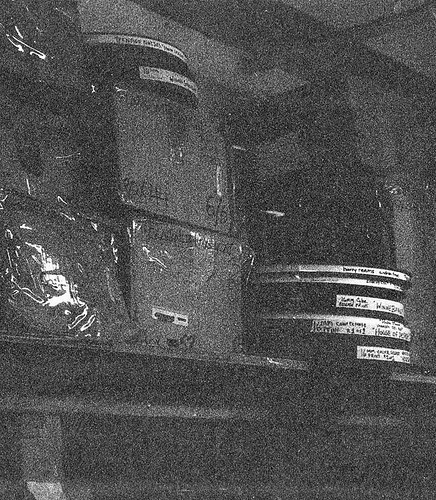 We pulled the big box down and opened it, and inside were the complete negative
and sound elements for All the Sins of Sodom, a film previously thought to be lost!” 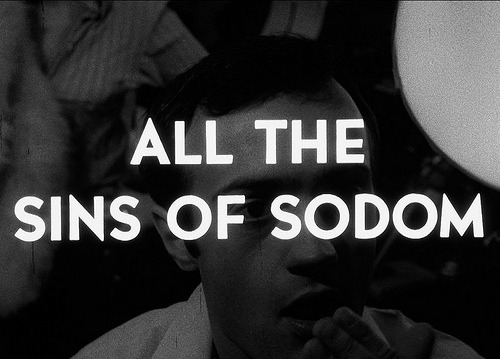 Q. Do you work with film archives, collectors, or film historians during the production of a video release? If so, how do they contribute to your restoration/distribution projects, and how would you describe your contribution, if any, to them?

Yes, and working with film historians like Michael Bowen and Ed Grant has been particularly invaluable. Their historic perspective “rounds out” the work I do and adds value to the final release. Historians, filmmakers and fans are often in some way, shape or form emotionally connected to a particular film or series of films. While fans of Joe Sarno or Carter Stevens are overjoyed to see rare unreleased films restored and released, I firmly believe that the bonus features (interviews, historical data that places the film in context) are also an important part of the restoration and release process. Liner notes, interviews and audio commentaries are all an important part of the “magic” of the process.

I’m also very fortunate to have been technically trained as a cinematographer and editor before I started my first home entertainment companies (Pop Cinema / Camp Motion Pictures). This training provided me with a “global” view of all the media that my company handles. Meaning, I have the technical knowledge of what the media is, which is essential for getting to the marketing stages, and I don’t have to rely on third-party handlers to deal with film and tape elements.

Many times a film is discovered only to then languish on a shelf. I spearhead the project by negotiating the deal with the film owner so that we can get the film off the shelf and back on the screen, be it the silver screen or the screen in one’s living room or laptop.

Q. Film archivists today use the term "orphan film" to describe any film that has been abandoned by its creator or copyright holder, neglected, or relegated to limited or no access. Do you consider independent exploitation horror and sexploitation as orphan genres, and what are your thoughts about the general state of archiving and preservation for titles in these genres?

I believe that exploitation or sexploitations films are as important to our culture as film classics like “Gone With The Wind.” It’s so fascinating that our “secret cinema” – the sex film - is not treated with the cultural respect that it deserves. I’m happy to say that this attitude seems to be changing: respected institutions like the British Film Institute, the Torino Film Festival, the Cinematheque Francais in Paris and the Warhol Museum recently honored the films of Joe Sarno by inviting Joe to events that showcase his work.

It’s a thrill and an honor to continue to work with newly found and forgotten films. With the amount of films currently “earmarked” for restoration and release, I expect my work will continue for many, many years to come.