Assuming that you currently have Cable TV, this means that old black & white or color TV you have in the garage or basement will not pick up a signal without connection to your cable or a digital converter. I’ve had digital television for quite a few years now, delivered to my TV via my regional cable company. I’m no stranger to cable TV. I worked for Comcast Cable for six years and spent many a morning, coffee in hand, BS-ing with the engineers that monitored the signals going out over the wire. As far back as the early 1990s, this conversion was being planned.

Is the signal better? Not in my opinion. I find the digital signal to be “thin”—with digital break-up…often. How about HD signal or the new LCD TVs? Not impressed. Analog, I will miss you.

Pictured above: May 1971. My Uncle Mike installing a state-of-the-art analog TV antenna on the top of a house in Toms River, New Jersey. My dad took the shot. 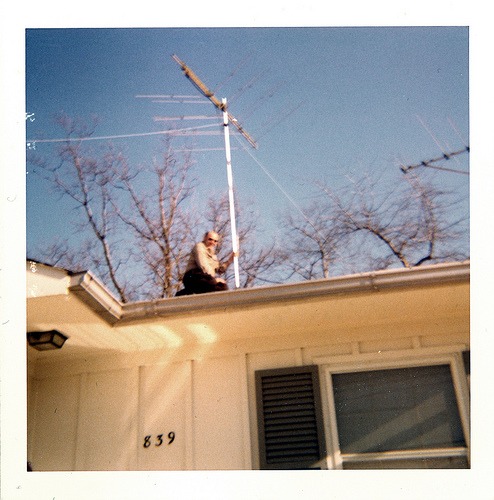